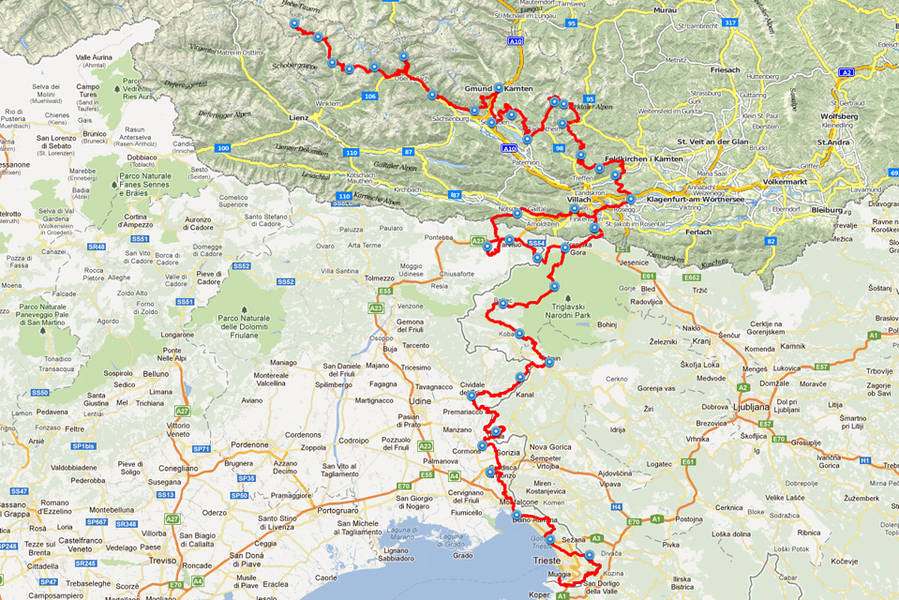 ...from the Grossglockner to the sea

We are off on a varied journey of discovery covering approx. 690 kilometres. Through three countries – Austria, Italy and Slovenia – and three cultures. From the foot of the majestic Grossglockner to the azure blue sea. On the Alpe-Adria-Trail – with heavenly views in the “Garden of Eden”. With views over a well balanced mix of glorious spectacles of nature, alpine water experiences and a fascinating world of animals and plants. Along lakes, streams and rivers until we reach our destination, the Adriatic.

Hiking has many different facets: one of them involves slowing down to exercise at a natural pace. When you do this, you acquire a form of effortless attentiveness which means you can observe nature especially intensively, a way of seeing which will turn out to be well worth it. After all, you are hiking on well marked paths from the foot of the highest mountain in Austria, the 3,798 metre high Grossglockner, to the Adriatic Sea.

In 38 stages, each of them covering a distance of around 17 kilometres, the Trail passes through Carinthia, Friuli-Venezia Giulia and Slovenia. A total of 690 km heading in a southerly direction. Accompanied by the Mediterranean climate, which promises you many hours of sunshine and pleasant temperatures, and stunning views of the paradise of the Alps and the Adriatic.

The route itself is our destination

The geographical destination of the Alpe-Adria-Trail is Muggia, a little to the south of the old Austro-Hungarian port of Trieste. On the way there, filled with the joy of discovery and enjoyment of life you will hike through the most beautiful areas of the Alps-Adriatic region.

The Trail follows the water in its wide variety of forms, from the perpetualice of the Glockner via waterfalls, rivers and lakes until you reach the sea. The paths have actually always been there, but they have now been brought together in their entirety in map form for the first time. If you don’t want to stride along the entire length, you can opt for your favourite stages in the “Garden of Eden”, which all have one thing in common: the heavenly views, the glorious spectacles of nature, sparkling swimming lakes, majestic mountain peaks and finally the azure blue Adriatic.

The first seven stages lead through the sunny, idyllic Moll Valley with its unique panoramic views over the impressive mountain world amongst the mighty 3000-metre summits.

The Trail starts at the foot of the Pasterze, the largest glacier in Austria, in the heart of the Hohe Tauern National Park, then after Heiligenblut it leads to Grosskirchheim. Here you pass the group of mills in Apriach which tell of the life full of privations that was led by the rural population from the 17th to the last centuries. The medieval artists’ town of Gmund also lies on your route – this was recently honoured with the “EDEN Award 2011” for its professional cultural work.

One of the most beautiful hiking regions in Carinthia is the Millstatter Alpe. This is due to its gentle curves and the magnificent view of Lake Millstatter See, the second largest Carinthian swimming lake, which lies down below. By now you are already in the midst of the gentle landscape of the Nockberge National Park, which stages 13 and 14 lead you through.

Arriach’s claim to fame is that it is the geographical centre of Carinthia. And it is also the starting point of the stage which leads up to the Gerlitzen Alpe, 1,911 metres above sea level. After a view over Lake Ossiacher See, this is the last stage which is entirely on Carinthian soil, from Velden am Wörthersee to the Baumgartnerhohe not far from Lake Faaker. Shortly before your destination you will come across the ruined Finkenstein Castle, a concert arena which impresses visitors with its wonderful views and stunning sunsets – which seem almost to be in slow motion.

On the next stages of the Alpe-Adria-Trail hikers leave Austria behind and enter Slovenian national territory, and at the same time the Skiing World Cup venue Kranjska Gora.

Here the route largely follows the Soča, which becomes the Isonzo on Italian sovereign territory, right through the Triglav National Park in the midst of the mysterious Julian Alps, the only national park in Slovenia. With a bit of luck here you will come across alpine wild animals such as ibex, chamois, red deer or wood grouse. You continue over the highest road pass in Slovenia, the Vršič, and on to Bovec, a popular water sports centre and at the same time the highest skiing resort in Slovenia.

Enjoy the unspoiled Soča Valley, awarded the “EDEN Award 2008” and also part of the park, a true jewel of nature with numerous natural places of interest such as waterfalls, caves and remote river valleys. Finally you will come to Kobarid with its historical reminders of the 1st World War, and Tolmin.

Above all the valley can thank the turquoise blue water of the wild river for its beauty; this rises from a karst spring in North Western Slovenia. A great area for wild water sports lovers and anglers, who may well pull one or two marble trout, a fresh water species from the salmon family, from the cool waters.

The further you penetrate along the Soča in a southerly direction, the prettier the landscape becomes. In the far west of Slovenia you will cross the Goriška Brda region, where the centuries old tradition of wine growing is continued in wine cellars. The unique position of this hilly region has produced many international prize winning wines.

At the end of the Trail, in an overgrown karst landscape, it is well worth visiting the cultural monument famous throughout Europe and the world, the Lipica stud farm and equestrian sports centre, which was founded in 1580 by Archduke Karl II.

The light of the Adriatic

In the Collio, as with the circular tour, you cross the border with Italy for the first time, so you can officially feel thesouthern cheerfulness, and push on westwards into thetown of Cividale del Friuli, which is rich in tradition.

Originally a Celtic settlement, it was elevated into a town by Julius Caesar. Since June 2011 the main town of the first Lombard duchy in Italy has been part of the UNESCO World Cultural Heritage.

Here you should prepare yourself for moments of sheer Italian enjoyment, and if you decide to hike this stage, make sure you have one of the numerous culinary guides in your luggage. Pay a visit to thewine makers of the Collio; they are known for the exceptional quality of their wine, which has been strictly controlled and guaranteed for more than 40 years.

The most important place in this enchanting hilly region,the Collio, is Cormons, a beautiful small town in the Habsburg style. Not only are the churches worth seeing, but also the numerous wine cellars.

The next destination is the karst, a high plain which rose from the sea 30 million yearsago and where the powerful Bora blows – a jagged and fascinating landscape. In Duino, where Rainer Maria Rilkewrote his famous Duino Elegies, you will reach the sea.And just a few kilometres further you will finally havemade it: You have reached your destination, Muggia.

An idyllic little harbour town welcomes you, characterised by the influences of Venetian culture. Listen to the clatteringof the masts of the sailing boats, let the tangy Adriatic aircaress your nose and follow the scent of the splendid seafish from one of the excellent Ristoranti. And while you areat it, enjoy the incredible view of the picturesque gulf of Trieste, which lies before you looking almost gold-plated.

The heart of the harbour city, which until 1918 was Austria sonly seaport, is the Piazza dell’Unita d’Italia (Square ofItalian Unity). This rectangular main square which adjoins the sea is bordered on three sides by magnificent neoclassical buildings.

If the entire Trail is too long for you, but you still want to hike your way to discovering three countries, your bestchoice is the short version of the Alpe-Adria-Trail: the 3-country circular tour takes you 123 kilometres on seven one-day stages through Carinthia, Friuli-Venezia Giulia and Slovenia.

You start off in Carinthia on the Baumgartnerhohe near Lake Faaker See, then continue to Warmbad Villach, Nötsch and Feistritz, before you reach Italy with the Canal Valley and the towns of Valbruna and the shopping town of Tarvisio.

After passing the famous place of pilgrimage Monte Santo di Lussari, the Laghi di Fusineand the foot of one of the highest mountains in the Julian Alps, the Mangart, you will reach Slovenia at Planica, famous for its ski jumping and ski flying, and the internationally famous winter sports venue Kranjska Gora,before you return once again to your starting point in Carinthia. 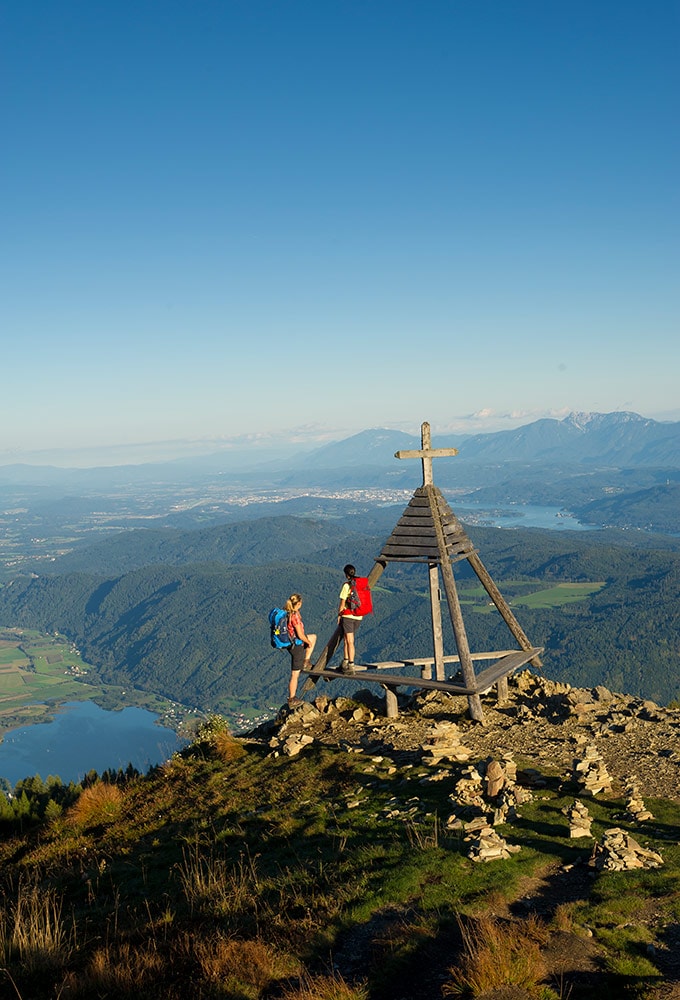 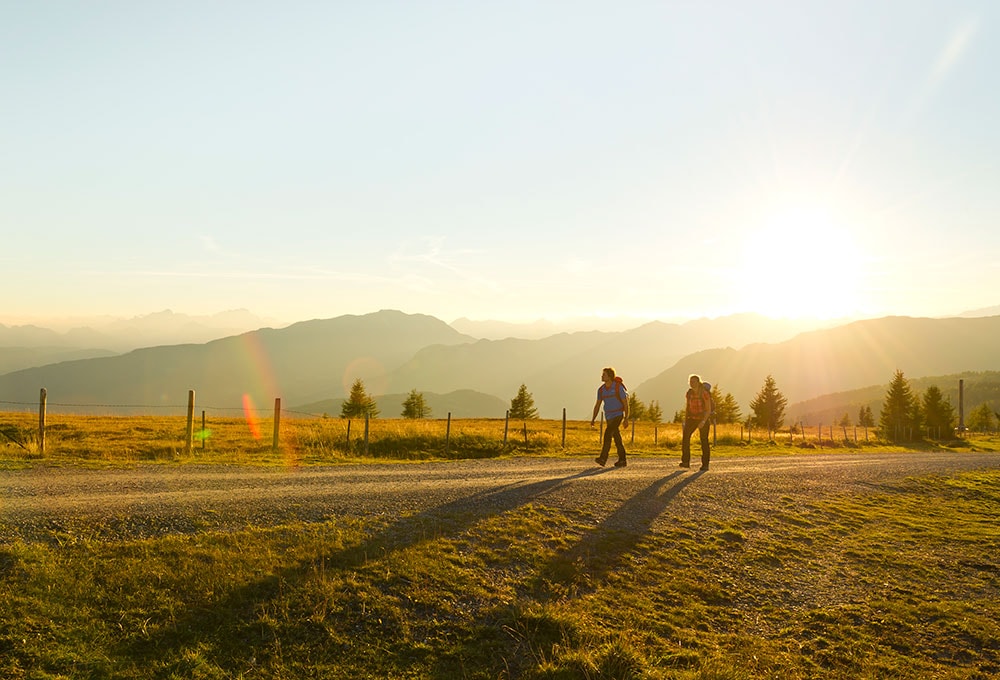 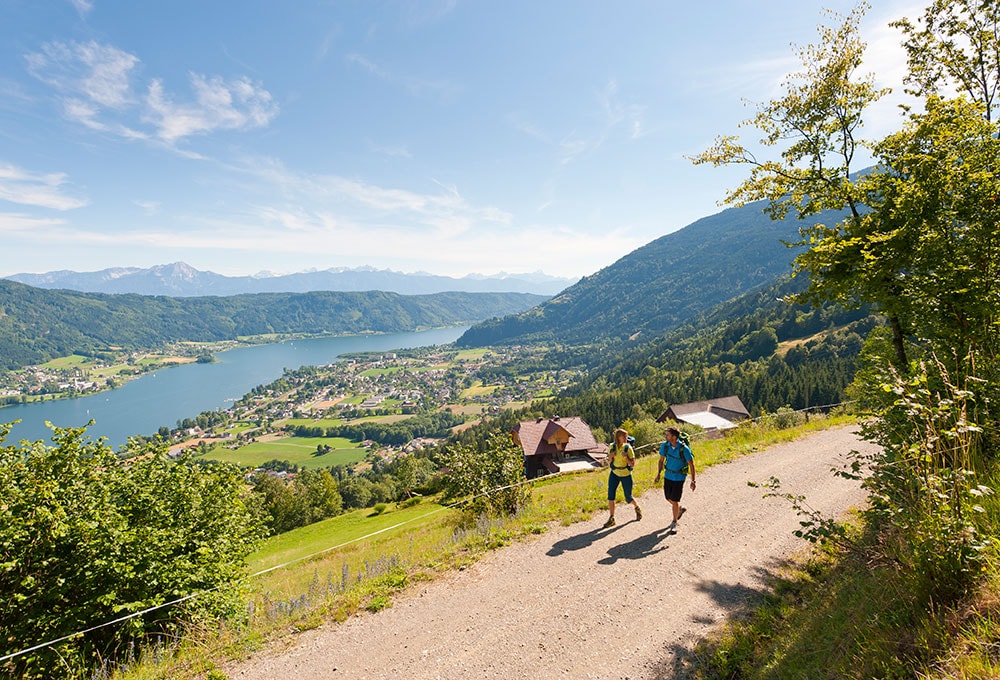 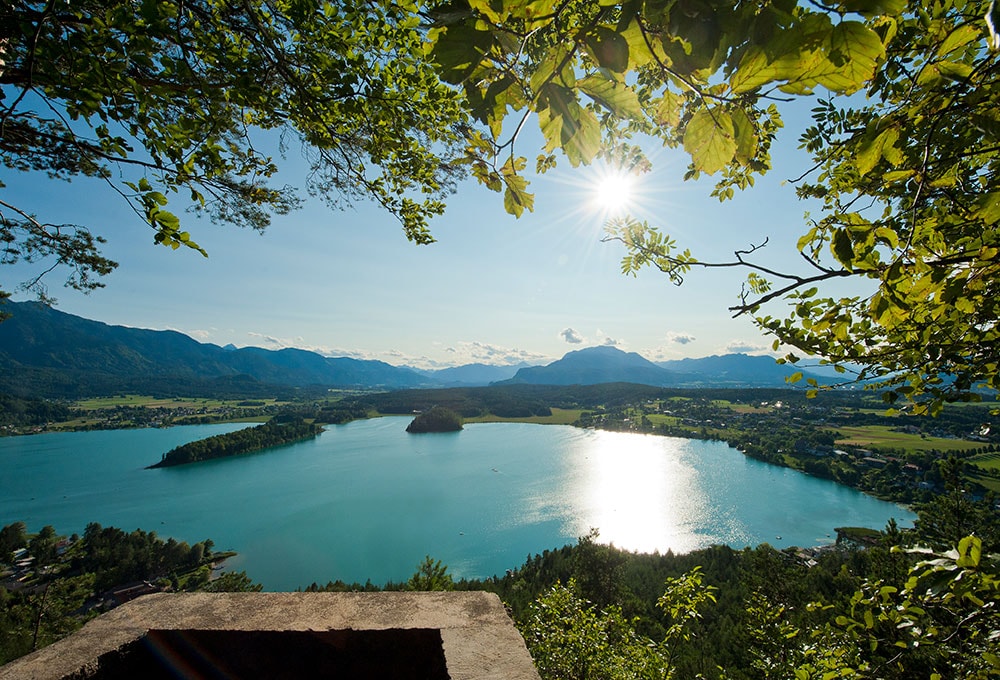 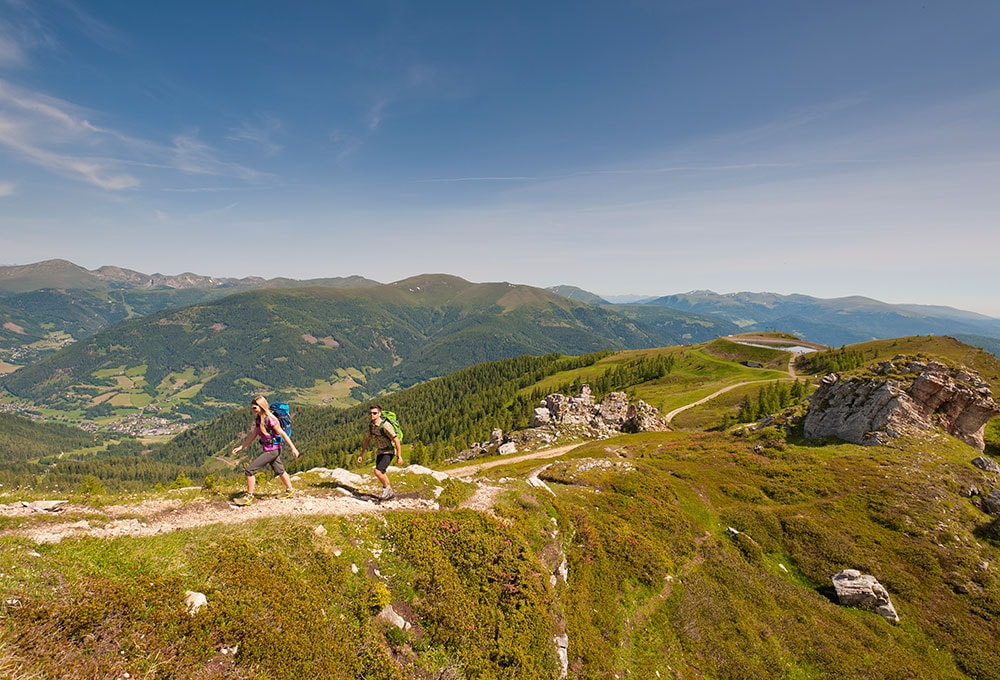 Calculate and book your stay online, with immediate confirmation, easily in just a few steps, in only 2 minutes!

Ask for an offer simply, in just a few minutes! We shall send you a personalised offer within no more than 24 hours!

If you book your room on our own website, you’ll receive the following discounts